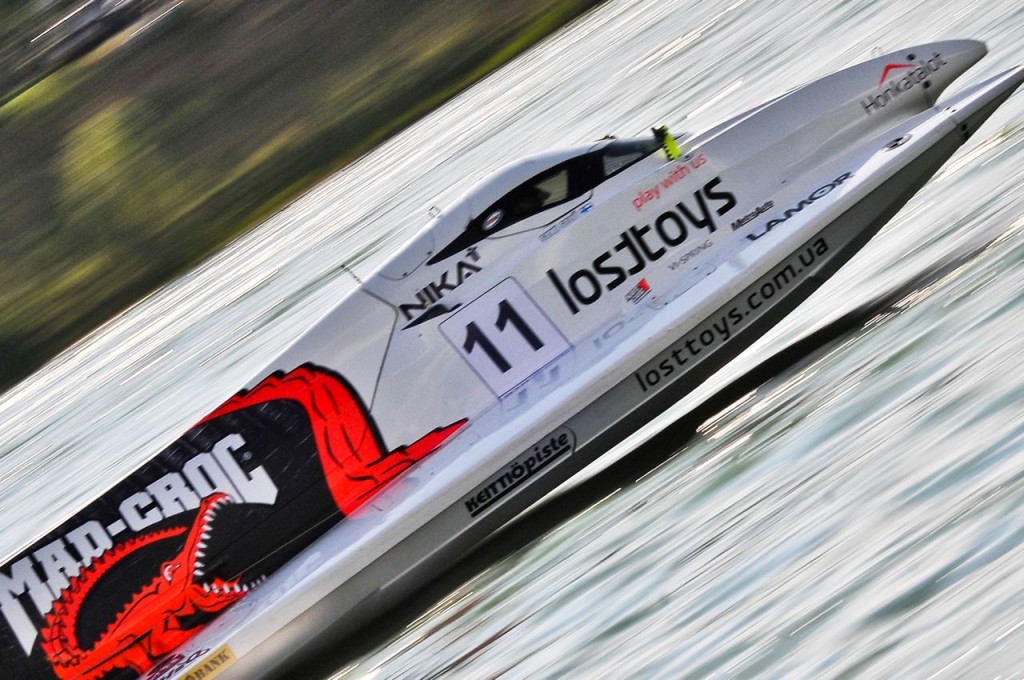 After a two and half month break the UIM F1 H2O Powerboat World
Championship resumes this weekend in Kazan, the capital and largest
city of the Republic of Tatarstan.

It?s the eighth largest city in Russia with a population of over 1.1
million and history dating back from over one thousand years. Local
historians will tell you that on the bottom of the Nizhny Kaban lake
lay some forty nine tonnes of jewels hidden there since 1552, today
though it was Shaun Torrente, from the Qatar Team who had the golden
touch.

In gusty wind condition that had caught out both local hero Stanislav
Kurtsenovskiy who spun out and the Mad-Croc F1 Team driver Filip Roms
who barrel rolled during the morning warm up, seventeen drivers from
eleven different countries set out to qualify for the thirteenth Grand
Prix to be held in the Russian Federation. After the first two
qualifying sessions the ten fastest divers lined up in the early
evening sun for the ?Shoot Out? and running in reverse order they each
went out to post a fast time from their two laps.

First away was Marit Stromoy, from Team Nautica, and she got half way
through hers when a timing problem forced her back to the dock. Even
having an extra lap didn?t help her though and she starts from tenth
place.

By the time the Mad-Croc F1 Team driver Sami Selio started his run
conditions had become exceptionally tricky; in fact perfect for a
sailing regatta.

?To be honest today didn?t go as planned? said Selio. ?Since we raced
in Qatar I have been able to train in the gym, (following my
recuperation from the accident I had last year) and I have lost some
ten kilos in weight. I thought we had added enough weight to the BaBa
hull, but maybe we need to add a bit more because coming around the
top turn I made a mistake and it nearly sent the boat over. This one
mistake cost me any chance of being on pole. Tomorrow the Grand Prix
will be all about who makes the best start because overtaking can be
tight here, although look what happened last year when Jay Price
started last after he changed his engine, where did he finish, on the
podium, so it is possible. What is important for me though is that I
must get some points, not a big fat zero like last year.?

The Mad-Croc F1 Team has a long night ahead of them as they set to
work to repair Filip Roms BaBa hull in time for the Grand Prix.

?I don?t think Roms has raced an F1 boat in conditions as tricky as
these? said Selio ?To be fair the gusty condition here has caught out
more experience drivers, and he?s still learning, sometimes though it
involves him getting wet. The boat had minor damage; just the engine
cover and rear cowling need replacing, but it?s the electrics that
will take the time to fix.?

Starting from the number one spot will be Shaun Torrente from Florida,
after he posted the first sub 43 second lap, a new record on this
course. This time never looked like being beaten given the Qatar Team
driver his first ever UIM F1 H2O pole position.

The Grand Prix of the Republic of Tatarstan has been brought forward
by one day following confirmation by the event organiser that
President Rustam Minnikhanov will attend the event. ”We are delighted
that President Minnikhanov will be able to attend the race. It is a
great honour for our sport.” said the UIM F1 H2O Promoter Nicolo di
San Germano. The action begins at 17:00 local, 13:00 GMT and can be
viewed live on the tours official website www.f1h2o.com

Final Qualifying positions for the F1H2O Grand Prix of Tatarstan.