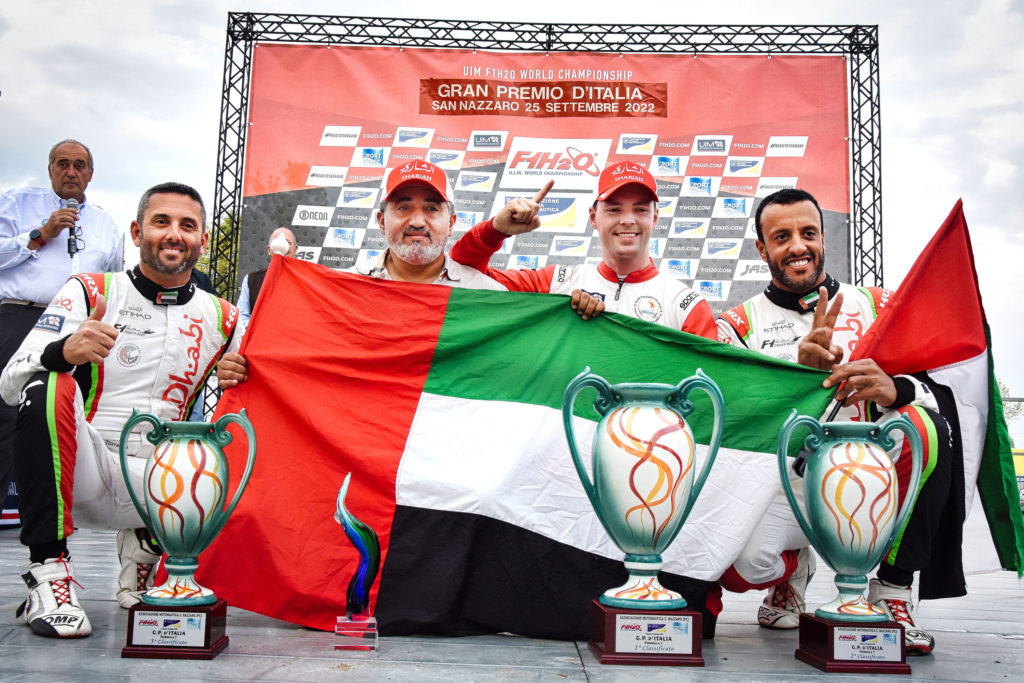 In only his fifth start in the F1H2O World Championship Sharjah Team driver Ferdinand Zandbergen raced from pole position to take the chequered flag at the Federazione Italiana Motonautica (FIM) Grand Prix of Italy which took place this afternoon on the Po River in San Nazzaro just south of Milan.

The young Dutch driver made the most of the advantage of starting from pole gives you and easily held off the challenge of Thani Al Qemzi and Philippe Chiappe as the pack rounded the demarcation buoy and headed off onto the first lap.
“Just before the red start lights went out Jonas Andersson jumped the start which really threw me” said Zandbergen. “Then by the time I reached the demarcation buoy I had plenty of room to make a good turn, after that I just settled into a rhythm.”
Even when the yellow flags came out on lap twenty-eight to neutralize the race allowing the rescue ski to tow the stricken Team Sweden driver Kalle Viippo off the course, Zandbergen didn’t panic when the race recommenced. Once again he drove away from Al Qemzi and his Team Abu Dhabi teammate Shaun Torrente who had worked his way up to third place by then.
“In the restart I was really nervous because I knew just how close it was till the finish and thought I can’t lose this now. I quickly looked in my mirrors just as the green flag came out and was really surprised just how much space there was between me and Al Qemzi but very grateful at the same time.”
With Sami Seliö guiding him home over the team radio Zandbergen crossed the finish line nearly nine seconds ahead of the Al Qemzi much to the sheer joy and delight of the whole Sharjah Team.
“It felt too good to be true” said the race winner, “this was just the boost the whole team needed.”
“For the Sharjah Team this weekend had up till then been a miserable one” admitted Seliö “but at least we have shown that we have two drivers who now have the speed and performance which is a huge thing in F1H2O.”
“We had decided that with me out of the race I would be his radioman, which I was when he raced in the UIM F2 World Championship. There were a few times that we saw he was on the limit but he listened and calmed down and coped extremely well in the restart, especially as we know that Torrente is a master of those situations.”
Now the Sharjah Team head to Sardinia where Round Four of the 2022 F1H2O World Championship will take place in Olbia over the weekend of 15 -16 October.