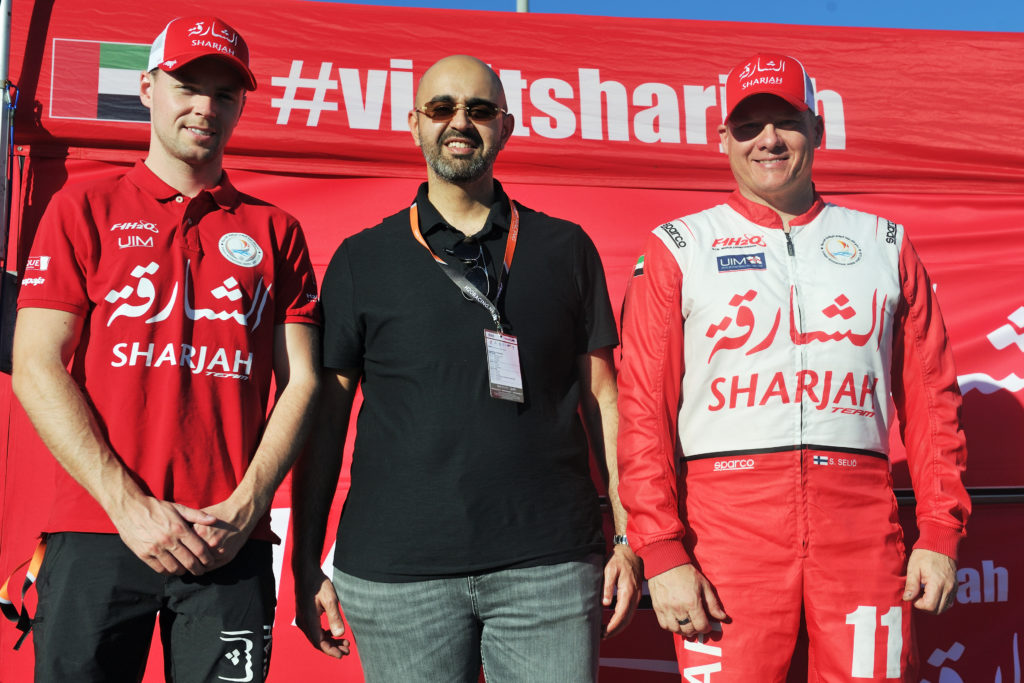 Following yesterdays modified qualifying session around the tight circuit laid out in Olbia, the H2O Racing Officials decided that a staggered start would be the safest option in getting all fifteen competitors comfortably around the top turn mark. The top ten boats were first off the pontoon and amongst them were Seliö in fifth place and Zandbergen in eighth, five seconds later the reaming five drivers joined the race.
Fortunately, everyone made it through but the yellow flags were soon raised when Team Sweden’s Kalle Viippo ran wide and was forced out of the running on the second lap. Both Sharjah Team drivers suffered from poor starts, Seliö was caught out by the spray from Team Sweden’s Jonas Andersson and Zandbergen struggled to get his engine to fire.
With the pack now closed back up the rolling restart worked perfectly for Seliö who managed to get past Gillman Racing’s Alec Weckström. Just a few places back Zandbergen had closed the gap on the three times World Champion China CTIC Team’s Phillippe Chiappe. “It was just about possible to stay close to him but the salty water on my screen had started to make visibility really tough” said Zandbergen.
By the twenty-ninth lap of the seventy-lap race, the yellow flags were back out as the ‘local hero’ Alberto Comparato, who had been challenging Thani Al-Qemzi for the lead suddenly broke down on the racing line. With the Italian now out of the running it moved Seliö up to fourth place a position he held for much of the race before retiring after fifty-eight laps. “I lost a blade from a brand-new propeller that we used yesterday for the first time” said the bitterly disappointed Sharjah Team driver. “I knew I had only twelve laps till the end but the vibration was getting crazy and I didn’t want to damage the engine, so I headed back to the pits.”
The yellow flag situation meant that Zandbergen had the perfect opportunity to close up tight on Chiappe. So, as soon as he heard ‘green flag’ from his radioman he blasted his way bast the Frenchman and up into fifth place. Ahead of him lay Weckström and try as he might he just couldn’t pass the Finnish driver and had to settle for fifth. “I really enjoyed it out there today” he said. “The conditions were a lot rougher than I had expected but the tussle I had with Weckström was great. I tried to pressure him into making a mistake but it just didn’t happen. In the end it was hard work but fun at the same time.”
Coming home in fifth place, just twenty seconds off the race winner, means that Zandbergen now moves into fourth place in 2022 UIM F1H2O World Championship – Drivers’ Championship, just ahead of Weckström. For Seliö though his tenth place overall brought no reward today as for him to have claimed the final point on offer would have meant that he would have had to have completed ninety per cent of the race distance, he just missed out by eight laps.
The teams thoughts now switch to their home Grand Prix, which will take place in mid-December, as the UIM F1H2O World Championship reaches its conclusion with back-to-back races at the Khalid Lagoon circuit in Sharjah.