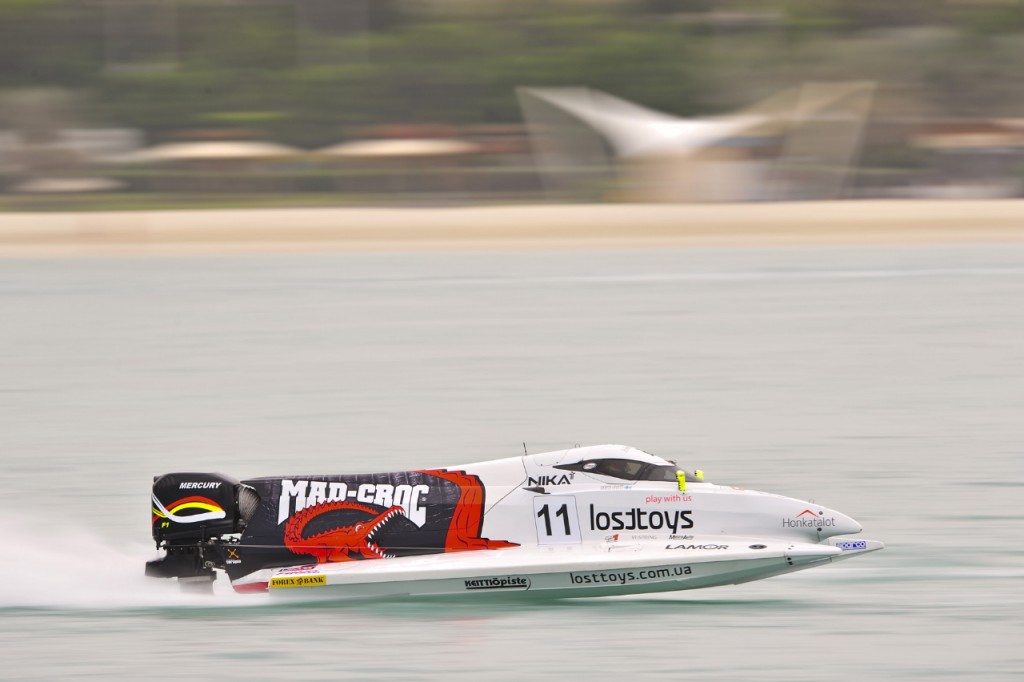 For the twenty first running of the Abu Dhabi Grand Prix the entry list reads like a ‘who’s who’ of the circuit racing world.

From North America comes multiple F1 Champion Terry Rinker, who will be replacing the suspended Shaun Torrente in the Qatar Team. Rinker will be  running an Italian DAC hull for the first time in his career, but to make him feel more at home he’s brought his own steering wheel with him. The 2008 F1 H2O World Champion Jay Price returns to the UAE, where he made his F1 debut, this time though he is with the Skydive Dubai Team. Making it a trio of Americans will be Scott Gillman, the four-time World Champion will be racing a third Abu Dhabi boat, a brand new BABA hull. He will be staring only his second Grand Prix in just four years since ill health forced him into early retirement from full time racing. From Sweden comes the reigning UIM Formula Two World Champion, Erik Stark and from England the 2012 British F2 Champion Malcolm Goodman.

Amongst those world title holders is twice World Champion Sami Selio and his Mad-Croc F1 Team. The Finnish driver, who admits he faces an up hill battle to take the 2012 title after he was involved in a crash at the Chinese Grand Prix, didn’t get his weekend off to the best of starts. “Yesterday we had an extra free practice session so the plan was to test all the propellers” said Selio. “After the boat was craned in I went to start it but we had no fuel pressure, so we lost the whole session changing over the fuel system.”

Things didn’t improve much during this mornings Free Practice session, when having only tried two different propellers his brand new engine developed a fault and frustratingly he was sidelined yet again.

With the team unable to trace the mechanical fault he was forced into using the spare engine to qualify with, plus he was completely in the dark about which propeller to use. “I really had no idea which one to run” he said. It didn’t take him long to realise he’d made a mistake with his first choice, fortunately though he had managed to set the fourth quickest time which would see him through into the second qualifying session. “That first prop was just not behaving itself” said Selio “So we went back to using one that I raced here with two years ago. I knew it would be on the limit but it was a risk I had to take.”

Making it through to the top ten ‘Shoot-Out’ Selio managed to claw back another second but his time of 47.44 would only be good enough for sixth place on the grid. “I was amazed how well things went” he said “Carella has a ‘dream team’ working with him including the likes of prop specialist Dave Dewald on hand. To be within two seconds of his pole position time is really an achievement.”

With the Abu Dhabi weather not looking great for race day Selio knows he will be up against it if he’s to secure a podium place. “Starting in sixth will mean battling with the ‘rush hour’ traffic especially now that we have a full grid of twenty three drivers. It’s been really interesting to see Scott Gillman testing the latest engine development, the Hardy V8. Now we have two different types of four stroke motors and I have heard that there is maybe a third one that will make its appearance next year. I really don’t know the reason why we’re going in this direction all I’m focussing on is making the Mercury engine run faster.”