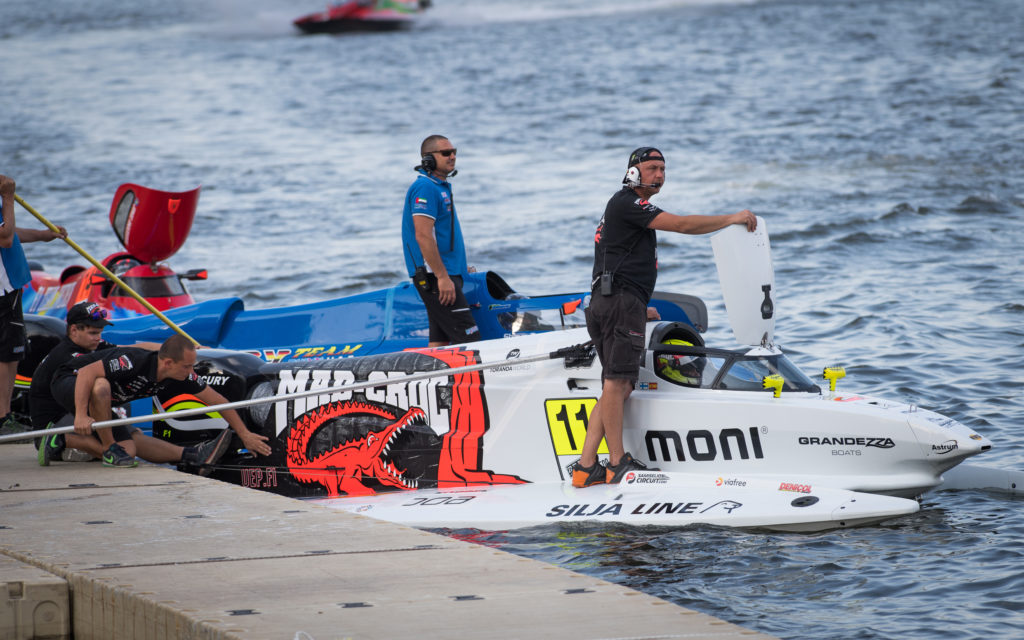 Thursday, 14 December, SHARJAH (UAE): Sami Seliö and Filip Roms will start from 13th and eighth in the UIM F1H20 Grand Prix of Sharjah and the Mad-Croc BABA Racing duo will be looking to end the year with strong performances.

It has been a tough second half of the year for Seliö with bad luck and a string of spectacular crashes halting his push in the title race which he led after the opening two rounds in Europe.

Despite two big offs in Abu Dhabi last week through no fault of his own, Seliö took the decision to race in Sharjah and his team has worked tirelessly to get him back out on the water.

A very credible outing in practice on Wednesday saw Seliö go ninth quickest despite losing his cowling. “At least the boat was still the right way up and almost all the parts we put on the water came back,” said an upbeat Seliö. “We were in a rush and these things happen but no big drama. The boat ran well but I didn’t really push in the tricky conditions which is not normal for Sharjah. The eye is fine but I will probably have nightmares if I see Q2 tomorrow!”

Seliö improved in this morning’s practice going seventh fastest but BRM Qualifying didn’t go his way finishing in 13th in Q1. “I am very disappointed. It was not the day I was hoping to have,” he said. “The team again did a great job but we didn’t have luck with us, but at least this time, no swimming.

“I made a big mistake with the propeller choice and my timing. I was not at the level I should be. But let’s see what happens tomorrow.”

Teammate Filip Roms improved session by session, improving from 14th and 12th in the two practice session and delivered a strong performance in qualifying. He posted the fourth best time in Q1 and missed out on making it into the top six shoot out by 0.06 seconds in eighth. “The boat was really good and we had a good set up but the conditions changed a bit and I wasn’t able to improve the time,” he said. “We have had a few technical issues this year but right now I am very happy with the engine, the boat and hope to run strongly in the race.”