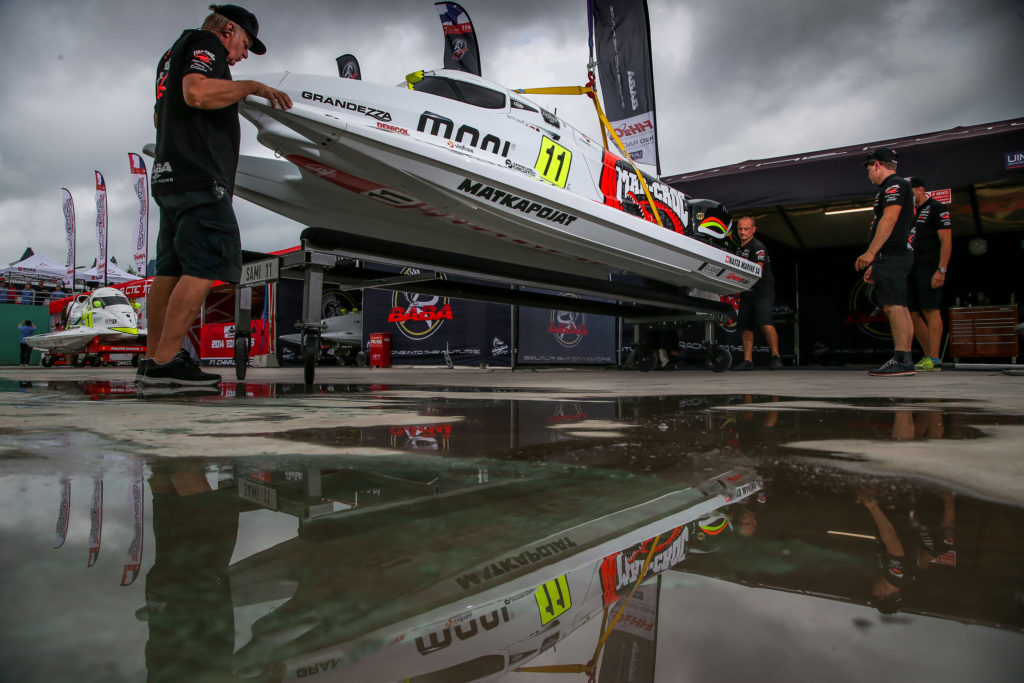 Saturday, 12 August, HARBIN (China): Sami Seliö’s chances of successfully defending his UIM F1H2O Grand Prix of Harbin title have been made all the more difficult after the Mad-Croc BABA Racing driver spectacularly crashed out in Q2 of today’s BRM Official Qualifying. The pole went to Sweden’s Erik Stark, with Thani Al Qemzi taking second spot ahead of Ahmed Al Hameli.

It was a big impact crash at turn three of the four pin 1.92km Hulan Estuary Wetland Park circuit but thankfully Seliö emerged with no serious injuries but somewhat dazed, battered and bruised.

“I feel quite ok, a bit beaten up, a little bit knocked about but I expect that after a full speed crash like that. I have some pain in my arm and my legs but nothing too bad. I hope to be in good enough shape to race tomorrow. We see in the morning. I will have to be checked over by the medical team. At the moment it is just the arm I am concerned about.” said Seliö.

“I think I was probably a little unlucky. I hadn’t done a great lap but it was good enough to get me into the shootout because all the times were very close. I was then on what was easily my best run, I didn’t feel that I made a mistake I didn’t see any bad waves I just turned in heard a big bang and then felt the impact. Maybe I got a little airbourne. The team say I was going in too fast. But you have to push and that lap would have been very quick.

“But these things happen. We never give up and just have to keep fighting. It reminded me of a few years ago when I was leading the championship and crashed also, now the same again”.

“But you know we are all so much on the limit these days. We are all so close with times and you just have to push to the maximum. You cannot drive in a safe mode anymore, there is no safety zone. It is the same for all of us. Sometimes you are lucky. Other times not.”

It was a frustrating end to Seliö’s day after easing through Q1 comfortably in eighth spot and then setting himself up for a shot at pole with the fifth best time of 12 in Q2 before his excursion and dramatic exit.

But it was not all despondency inside the Mad Croc BABA camp, with Filip Roms delivering a very solid performance and will start tomorrow’s race from P10.

Tomorrow the drivers have one more opportunity to finalise set-ups with practice at 09.45hrs [local] followed by the UIM F1H2O Grand Prix of Harbin starting at 14.00hrs.
If Sami Seliö gets the all clear to start tomorrow, he will be in his spare boat and starting from the back and one would imagine that the two-time world champion will be in the mood to carve his way up through the field and into a strong points finish or better!!

[The UIM F1H2O Grand Prix of Harbin starts at 1400hrs [local] on Sunday 13 August and will be streamed live on f1h2o.com]