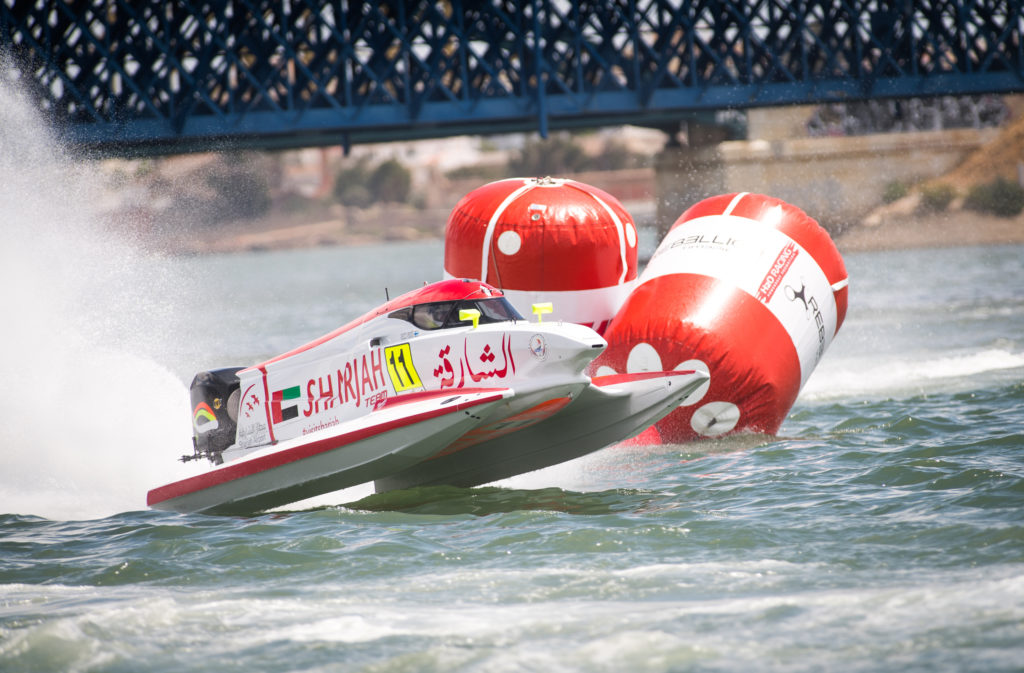 Sunday, 19 May, PORTIMAO (Portugal): Sharjah Team’s Sami Seliö with start today’s UIM F1H2O Grand Prix of Portugal from 11th after a small mistake in the second session in yesterday’s Rebellion Qualifying effectively ended his chances of improving.
Teammate Filip Roms starts from 16th after a difficult first session in which he struggled to find the right set-up.

Seliö looked to be on course for a good qualifying slot, topping the time sheets in Q1 with a 45.76s lap around the 1.937km Arade River circuit, but in Q2 and on a flyer he caught a wave that pitched the boat into a pair of buoys, popping one that wrapped around the cockpit of his BABA.

Despite getting the boat back to the pits to have the remains of the mangled buoy removed, the clock timed out with Seliö unable to get the chance to improve on his time. “Very frustrating but it was my mistake. I was a little too close to the buoy and caught a wave which pitched me straight into it,” said Seliö.

“But what is more frustrating for me is that when the accident with Erik Stark happened the timing, the clock should have been stopped. By the rules we must have 15 minutes running time and we didn’t. As a result I couldn’t get back to the pits to have the buoy that was wrapped around my cockpit removed and get back out for another flying lap.

“Up until then it was fairly okay. We were quickest in Q1 and although we are not where we want to be in terms of performance we have played it quite safe”.

“Now we see what we can do from P11 off the dock. But at the end of the day if I need someone to blame I must look in the mirror.”