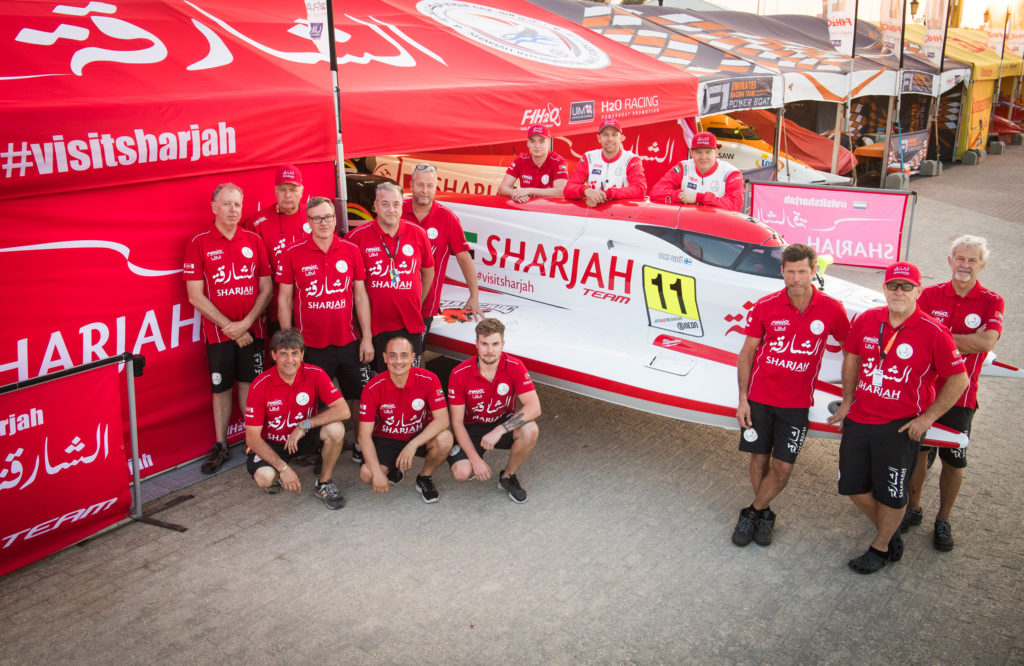 Thursday, 4 April, HELSINKI: The opening round of the 2019 UIM F1H2O World Championship proved a frustrating weekend for Sami Selio and the Sharjah Team, with adverse weather conditions disrupting the weekend’s schedule and resulting in the cancellation of today’s race . “It has been a very frustrating few days for us and all the other teams and of course very disappointing for all the spectators who came to see the race,” Selio said. “Despite the fact that we had very little time to prepare for the race we felt we had an opportunity to do well. I have raced in many rough race situations but today there really was no option. It was simply too rough and to risk it would not have made any sense.”

The season-opener was to have been the first opportunity for Selio and teammate Filip Roms to run for the first time competitively in the colours of the Emirate of Sharjah following the multi-year cooperation agreement signed with the Sharjah International Marine Sports Club (SIMSC) and announced earlier this month at the IBT (Internationale Tourismus-Borse) in Berlin.

But on the Thursday the 30km/h winds blowing in off the Gulf and creating one meter plus waves forced the hand of race officials and the postponement of extra free practice and with similar conditions expected on the Friday the decision to reschedule and bring forward Rebellion Official Qualifying was taken, with the teams and drivers only to be frustrated once more with qualifying postponed due to the worsening weather and sea conditions.

In an effort to give teams an opportunity to get some time on the water ahead of the scheduled Grand Prix Start, and with the weather in mind the Saturday programme was brought forward with qualifying to take place at 0830hrs followed by the race at 1130hrs.

But once again the conditions dictated proceedings with the scheduled 90 minute qualifying session red flagged after just 30 minutes with drivers managing to run just a handful of laps and posting some non-indicative times.

And despite the best efforts of the event organisers, race officials and the drivers to try to salvage the day and get the race underway the start was delayed by half an hour in the hope that the conditions might ease. The boats were eventually craned onto the water for a parade lap and then following the safety boat completed several laps of the shortened circuit to evaluate the situation. But after three laps the boats were called back to the pontoon by the race director and the race was officially cancelled.

After today’s frustrating and disappointing outcome the UIM F1H2O World Championship now heads to the Algarve resort of Portimao for the UIM F1H2O Grand Prix of Portugal on 17-19 May.