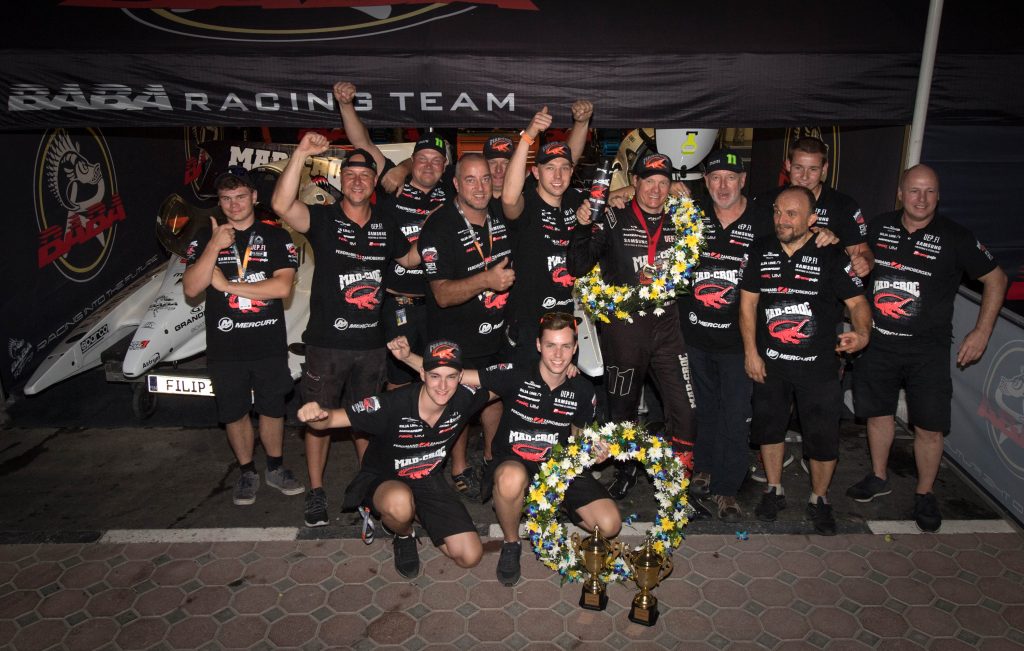 Friday, 16 December, SHARJAH (UAE): Mad Croc BABA Racing’s Sami Seliö ended the year on a high with a typical battling performance to take third place in the UIM F1H2O Grand of Sharjah, with teammate Filip Roms finishing in seventh.The race win went to Victory Team’s Shaun Torrente, with CTIC F1 Shenzhen China’s Philippe Chiappe taking second to clinch the UIM F1H2O World Championship.
Today’s result rounds out a season of highs mixed with one or two frustrations for Seliö and the team, who started poorly with Seliö failing to post points in Dubai and Evian, but then bouncing back taking pole position and a podium in Portimao, the pole and race win in Harbin, followed by two more podiums in Liuzhou and today in Sharjah.
Today’s result gives Seliö third overall in the UIM F1H2O World Championship and Mad Croc BABA Racing second overall in the Teams Championship.
After a frustrating fifth in qualifying Seliö battled throughout the race but was back in seventh place when the yellow was raised after a crash involving Xiong Ziwei.
Immediately after the restart Seliö made up ground passing Bartek Marszalek and then Alex Carella, only to lose the place a lap later.
But Seliö hounded Carella, the pair passing Erik Stark and then Jonas Andersson. Out front Torrente was a solitary figure and took the win, with Chiappe following him home.
Seliö pursued Carella and his persistence paid off when the Abu Dhabi driver’s engine let go two laps from the chequered flag, with Seliö grabbing his fourth podium of the year. “I was very disappointed with qualifying yesterday, partly due to my driving and struggling to find the right set up. It didn’t work out in the shoot-out, but in Q1 and Q2 we were close to the top and everything worked well. But I think after I saw Jonas crash I was too careful and not wanting to make any mistakes, especially as I had lost my telemetry so I really was being cautious.
“Today I guess I should be happy, but the engine was terrible in the beginning,” said Seliö. “The engine just didn’t pull off the pontoon at the start with low RPM and all sorts of issues. I had no windscreen wiper and the visibility was terrible.
“So lacking power and hard to see made it very hard to catch the guys in front of me. But in the end we kept fighting and it paid off. Of course the target was the title but that went in Abu Dhabi but to finish third overall in the drivers’ championship and second in the teams’ championship after the start we had to the year and the points we gave up, is quite satisfying.
“I think we have proved as a team that we don’t give up and I have shown I can still fight for the wins and podiums and get them.”
Filip Roms rounded out his year with a well-deserved seventh place today after starting from ninth, the highlights of his year a brilliant podium second in Evian and his best ever second spot in qualifying in Harbin just tenths behind Seliö.
In The F4-S Championship Ferdinand Zandbergen ended his season with fourth place today in race 2 to take third overall in Sharjah and seal the runners-up slot in the championship standings.