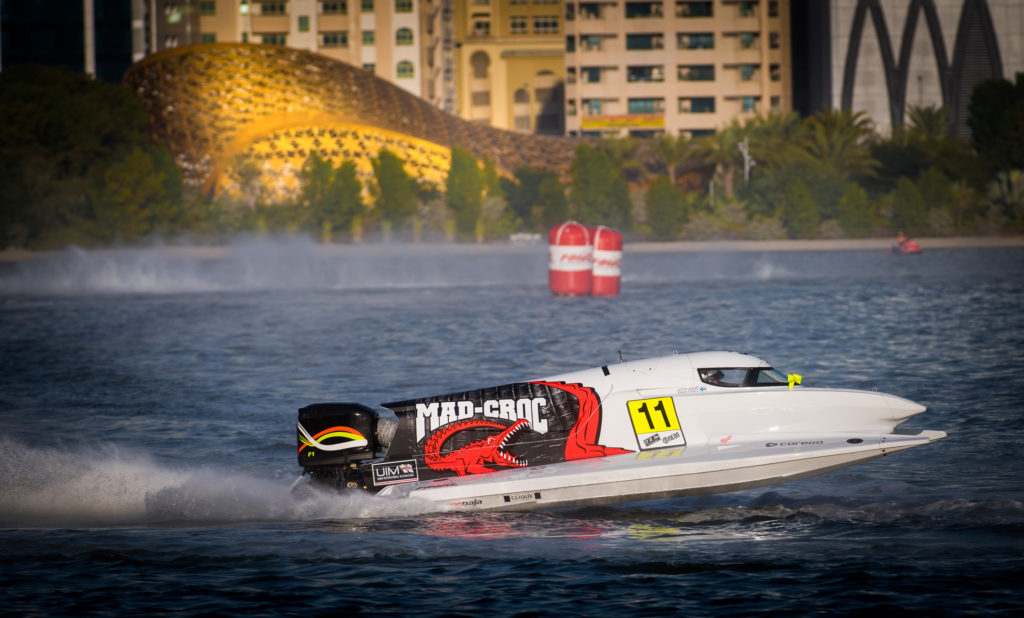 Friday, 14 December, SHARJAH (UAE): Sami Seliö’s strong end to the season continued at the UIM F1H2O Grand Prix of Sharjah producing his best result of the season in BRM Qualifying to go third quickest, with teammate Filip Roms also enjoying one of his best outings in eighth.

On a busy first day of the race weekend on the revised 2.17km 5-pin circuit on Khalid Lagoon there were early signs that after a season of anguish and frustration the return to form shown in Abu Dhabi with Seliö on the podium in third was not a one off.

Opting to run the newer of his two boats Seliö was on the pace in extra free practice in sixth and improving in the second morning session going fourth quickest and carried the pace into qualifying, setting the pace in Q1 and topping the time sheets with a 48.11s lap, Roms right on the bubble in 12th with 49.22 but through to Q2.

Seliö was again in at the sharp end in the second session going second quickest to join Carella, Al Qemzi, Andersson, Stark and Morin in the top-six shootout, Roms missing out but posting a very credible eighth best time and by far is best of the year.

The shootout was tight with 1.02s splitting all six and Seliö’s 45.79s lap only 0.18s of the pole time set by Team Abu Dhabi’s Erik Stark, Amaravati’s Jonas Andersson second quickest with 45.67s.

It is an all Scandinavian top three starting line-up for tomorrow’s final race of the year, with Seliö going from third – in Abu Dhabi he started 10th and was into fourth by the second turn! “Finally we really are getting back on track and these are the kind of results we should be getting all the time. I made some small mistakes and maybe the propeller choice was not perfect. But we see what we can do from third.” said Seliö. “I decided it was time that I tame the new boat which is totally different to drive than the other one but it is fast.

“It will be challenging on Saturday. The start straight is not so long which may not help me. I haven’t had too much time in the boat to find the various set up options and will do some starts in the final practice. What will be critical will be the propeller choice, the course has no right-hander and I don’t think it will be one of the fastest races. Acceleration not top end will be the key.”

The final practice session of the year starts 10.15hrs [Saturday 14] followed by the UIM F1H2O Grand Prix of Sharjah at 16.00hrs