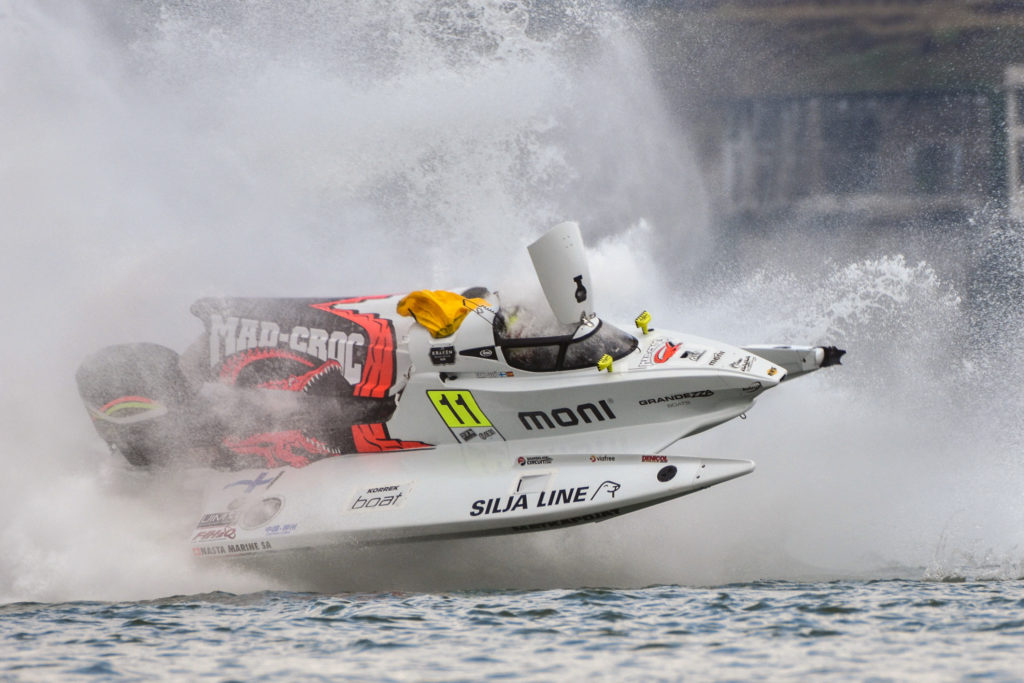 Saturday, 30 September, LIUZHOU (China): The China rounds of the 2017 UIM F1H2O World Championship are forcing Sami Seliö and Mad Croc BABA Racing to dig deep into their reserves of resolve following a dramatic crash in Q2 in BRM Qualifying ended Sami Seliö’s hopes of challenging for his fourth pole position in Liuzhou.
The two-time champion currently sits in second place in the title race but will have to produce something special in tomorrow’s UIM F1H2O Grand Prix of Liuzhou to keep his challenge intact and will start from P9 off the dock.
Pole Position went to points’ leader Alex Carella, with Erik Stark in second and last year’s Liuzhou pole and race winner, Ahmed al Hameli lining up in third.
The team endured a frustrating practice on Friday that was blighted with engine issues and had little time in this morning’s practice to make up ground which was cut short due to a torrential downpour and zero visibility.
Seliö eased through the first 20 minute session and was sitting in ninth place in Q2 and pushing for a top six slot in the shootout when he barrel rolled his BABA. “I didn’t seem to have the pace I needed although the set-up was quite good so it was a case of push for one more lap, then another,” Seliö said. “I was trying to get the best line so I could be at the maximum for the first turn but I had to keep within the circuit limits. It really didn’t look like there were any waves to worry about but in fact there was. Just one that was big and it caught me.
“These days everyone is so close in terms of times and you just have to push to the limit. And that’s what I did. But Really I was very unlucky.
“I wasn’t driving over or beyond my limit. I know what the boat can do but sometimes in the turn you catch a rogue wave and these things can happen.”
The damage to the boat appears not to be too extensive and the hope is that the engine will be okay and they don’t have to replace it. If that turns out to be the case then Seliö will start P9.
There was not much cheer for teammate Filip Roms who said simply that ‘he was not quick enough’ after qualifying in 14th.