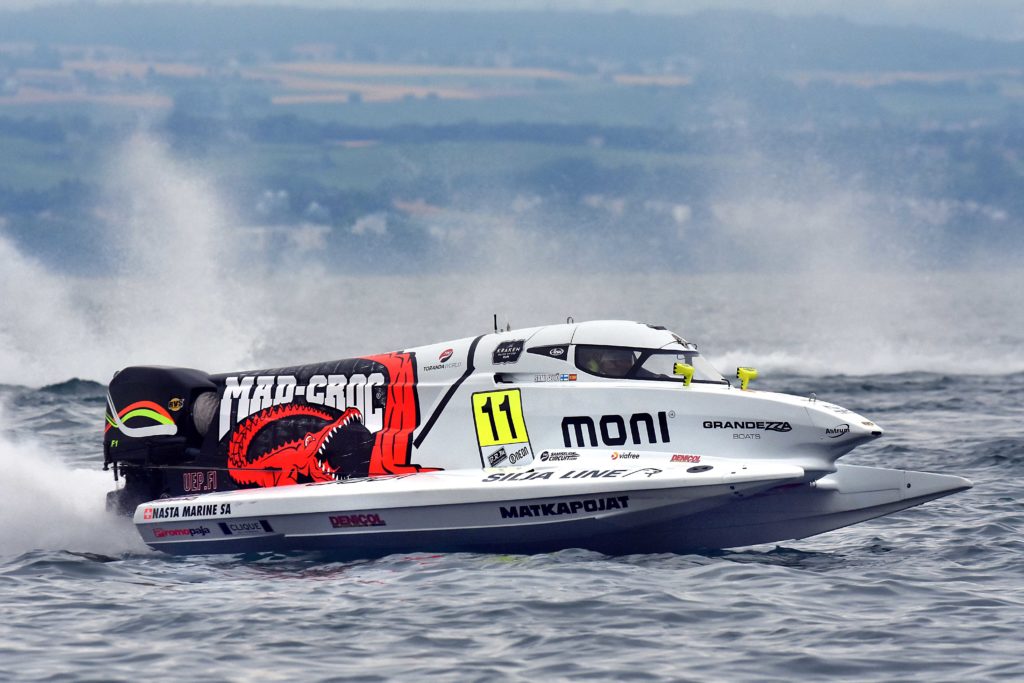 Sunday, 2 July, EVIAN (France): After three days of disruption due to changeable weather and bad conditions on Lac leman, Mad-Croc BABA Racing’s Sami Seliö emerged as the new leader in the 2017 UIM F1H2O World Championship title race.
On a packed day of activity at the UIM F1H2O Grand Prix of France with practice, qualifying and the 45 lap race crammed into just a handful of hours, Seliö once again proved that he is back at his best.
The two-time world champion delivered a strong showing in BRM Official Qualifying going third quickest to Alex Carella and Philippe Chiappe and then bettered his starting position to take his second consecutive podium of the season, with second.
The race win went to Team Abu Dhabi pole-sitter Alex Carella, with Victory Team’s Shaun Torrente recovering from a crash in qualifying and starting in 15th to take third.
Seliö was running untroubled in third and chasing down Chiappe when the yellow flag was raised on lap 11 after Australian Grant Trask barrel-rolled out of the race.
At the restart he immediately got ahead of Chiappe and went after the leader, but despite pressing hard was unable to close him down and settling for second place to move into the lead in the world championship standings for the first time since winning in Brazil in 2013. “It went alright. We played it smart,” said Seliö. “In the morning we made a mistake and were a little unlucky in the qualifying and were delayed getting the boat in the water to get the best conditions. But I was pleased to be starting in third.
“The race was good. After the restart I caught up and passed Philippe [Chiappe] and I tried to go after Alex [Carella]. But I really couldn’t do too much. We had the same speed and I was waiting and hoping for his mistake but he’s a multi time champion and didn’t make one.
“Towards the end I decided to take it a little easier as I had some problems with the handling as the boat got lighter.”
For teammate Filip Roms the day ended in frustration, retiring on lap 25 after qualifying well in tenth place.
The UIM F1H2O World Championship now heads to the Far East and to Harbin for the Grand Prix of China on 11-13 August, and Seliö and Roms will be looking forward to returning there after a one-two in qualifying in 2016, with Seliö going on to take the win and now, 12 months later, sits on top of the world championship standings.