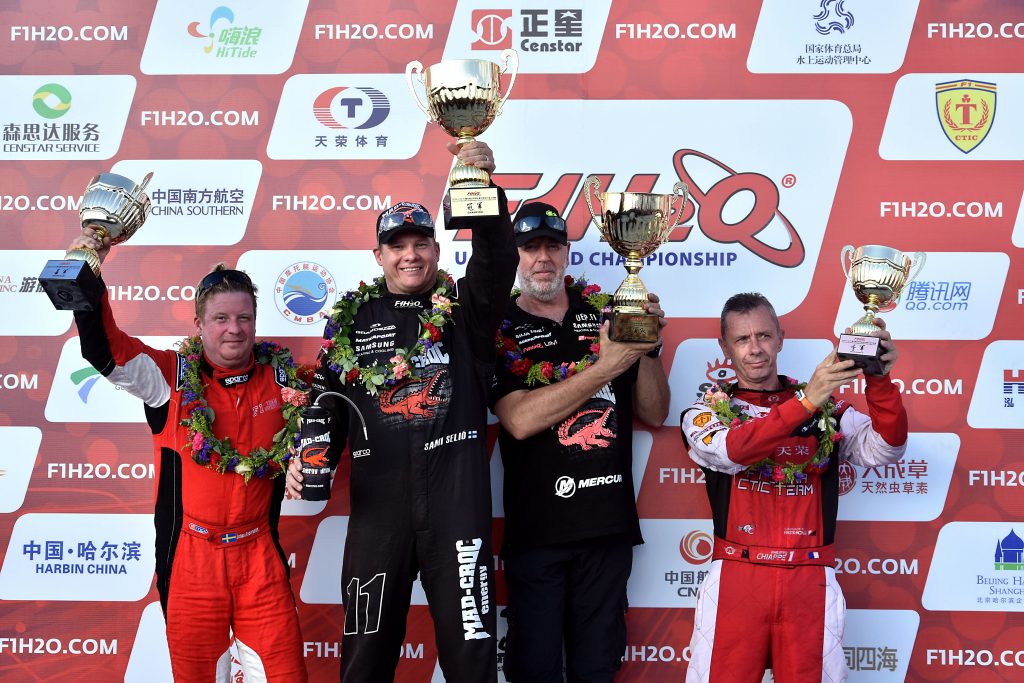 But there was disappointment for his younger teammate Filip Roms whose hopes of possible first Grand Prix win ended on lap 24 of 60, crashing out after a collision with championship leader Alex Carella.

Today’s win for two-time champion Selio, the 13th of his career, his third in China and first since Abu Dhabi in 2013, completes a remarkable turnaround in the BABA Racing driver’s fortunes and puts him up into fourth place in the championship standings and back in the hunt for a third world title. “It is great for the team that we are back on the top step,” said Selio. “It has been a long time, a frustrating time because we have been so close many times recently, in Abu Dhabi and in Porto. So to finally do it is great. I am disappointed for Filip. I haven’t seen what happened but the main thing is he is OK. He really did a great job this weekend and he will only get even better.”

“From the start I was very confident and felt very comfortable and in control, but when the yellow flag came and held as for so long I knew the restart would be crucial and that everyone would be pushing. But it turned out OK. I was able to pull away again but was a little nervous about the engine. The end of the race was the hardest. The boats were all getting lighter and it was quite rough. Now I am looking forward to the next race.”

The BABA [Racing] duo made the perfect from one-two off the pontoon with Selio slowly edging out to a comfortable lead lap-by-lap.

Roms meanwhile had his hands full and doing a remarkable job holding off Carella, when the two collided heavily on lap 24 as the Team Abu Dhabi driver tried to go around the outside on the turn leaving Roms with no room. “I’m OK. My neck is a little bit stiff but otherwise everything is good,” said Roms. “I was having a really good run, the boat and engine were running great and I was able to push. But we came up against a back marker, Alex [Carella] was pushing on the outside and he turned in and much tighter than I was expecting and I just had nowhere to go.”

The yellow flag held the boats line astern for 12 laps before releasing them with 23 laps to run and Selio immediately picked up where he left off, but now had Andersson, Chiappe and a hard charging Shaun Torrente, up from 16th to fourth, all giving chase.

Selio controlled the remaining laps and when Ahmed Al Hameli went up, over and out on lap 58 and another yellow flag raised, the 13th chequered flag of the flying Finn’s career was just a formality.

The BABA Racing Team will now look to carry the momentum that is building into the next race in four weeks’ time in Liuzhou, China.