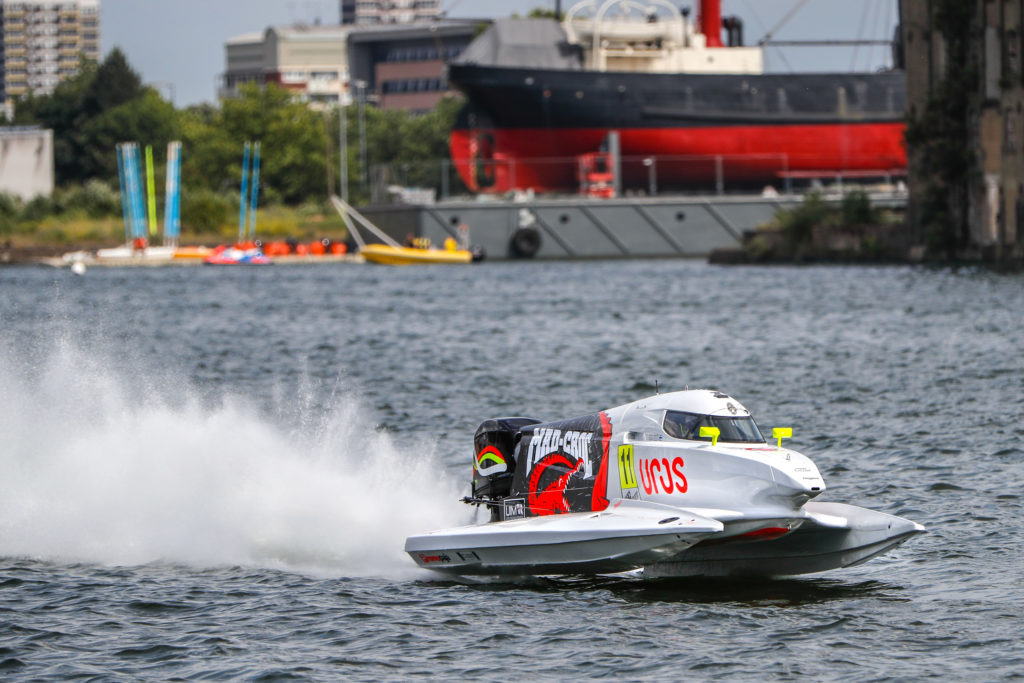 Monday, 18 June: Mad Croc BABA Racing’s Sami Seliö picked up his first points of the season and got his championship campaign underway with a typically determined drive at last weekend’s Grand Prix of London, round 2 of the UIM F1H2O World Championship, fighting his way through the field to finish in fifth.

It was a just reward for Seliö and the team after a second Grand Prix weekend plagued with engine issues which put them on the back foot from the start and forced them into running a conservative engine mode for Seliö in the race.

Both Seliö and teammate Filip Roms struggled in first practice and then in BRM Qualifying due to the recurring engine problems, Seliö making it into Q2 and qualifying in 12th the unfortunate Roms missing the cut in 17th and then failing to start the race.

The race marked a return of the championship to London for the first time in 33 years and the decision was taken by officials to opt for a rolling start on the narrow three-pin 1.72km Royal Victoria Dock circuit, which immediately played into Seliö’s hands after a great start and immediately moved him up from 11th to 8th on lap 1.

The first of two yellow flags was shown on lap 9 when Shaun Torrente speared two buoys ending his race, with Seliö moving up another spot on the restart. By lap 35 he had carved his way into fifth when the second yellow was waved when Alex Carella crashed out.

Seliö pressed for the remainder of the 54 lap race but was unable to make up ground on the man in front of him, Thani Al Qemzi.

“Finally we got to the end of a race and picked up points despite all the issues and we should be happy for that,” Seliö said.

“Even in the race I had dramas. Someone hit me in the first turn, my engine cowling was loose and a sparkplug wire was almost disconnected and the engine was sometimes only firing with five cylinders. So I didn’t have the power to push and it was challenging to get through the race. Without these problems we could have had a better result. The big positive is that the new boat is good.”

The result puts Seliö on the championship points table in eighth with seven points and with just 20 points separating the top eighth he is back in the hunt for a third title.

Round 3 of the UIM F1H2O World Championship, the Grand Prix of France in Evian takes place on the 29 June to 1 July.