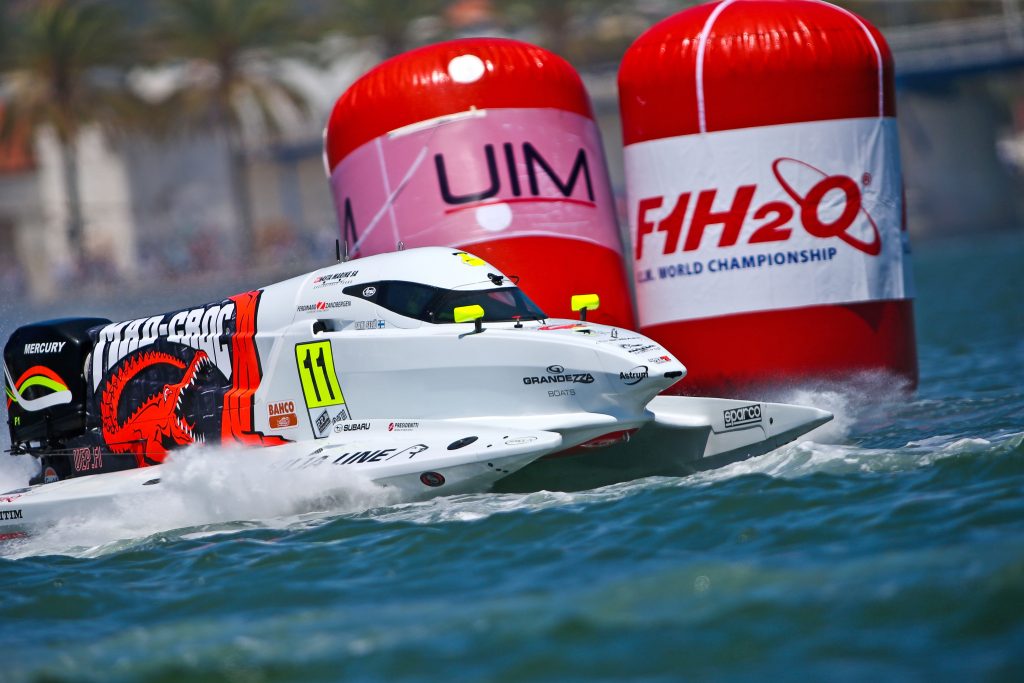 Sunday, 31 July, PORTIMAO (Portugal): Finland’s Sami Selio silenced his critics with a brilliant return to form on the Arade River in Portimao to take pole position for the F1H2O Grand Prix of Portugal in a fiercely competitive final session with a mere nine-tenths separating the top eight, and then went on to finish in second place in the race.

After a season to forget so far it all came together for the BABA Racing driver whose time of 43.11 was enough to give him his 24th career pole by just eight-tenths of a second and his first since Porto in 2015. “At last finally we get a good outcome. It has been a really difficult period but it’s great to have pole and now we have to see how the race will go,” said Selio. “It felt good but we were running a spare, spare engine and although we were limited with what we could do I was happy with the set up. We tried some different props which worked well and I don’t think I could have pushed much harder. I was quite on the limit but kept in mind that we also have to race in a couple of hours.”

The race proved to be another huge step forward and a boost for the team, and despite losing out at the start and dropping to third, Selio moved up into second after passing Alex Carella on lap 30 of 48 and was able to hold station to the chequered flag despite pressure from Torrente. “We really needed this weekend. Quickest in qualifying and a podium really is very satisfying. I am extremely pleased,” he said. “We showed we had the pace and finally the reliability so a big thanks to all of my team.

“We didn’t have a free practice after qualifying to set the boat up for the race so it was really a bit of a lottery. But over the year we’ve changed the boat, the engines the props so we always knew the race was going to be a little challenging.

“But I think we’ve shown, and I’ve proved at least to myself that I can still drive the boat fast enough and maybe to others too.”

After a brilliant second place at the Grand Prix of France two weeks ago, it was a somewhat frustrating weekend for Selio’s teammate Filip Roms, manging only 16th in qualifying due to an issue with the engine and then driving to 13th but missing out on points.

Round 4 of the F1H2O World Championship takes place on 2-4 September in Harbin, China.