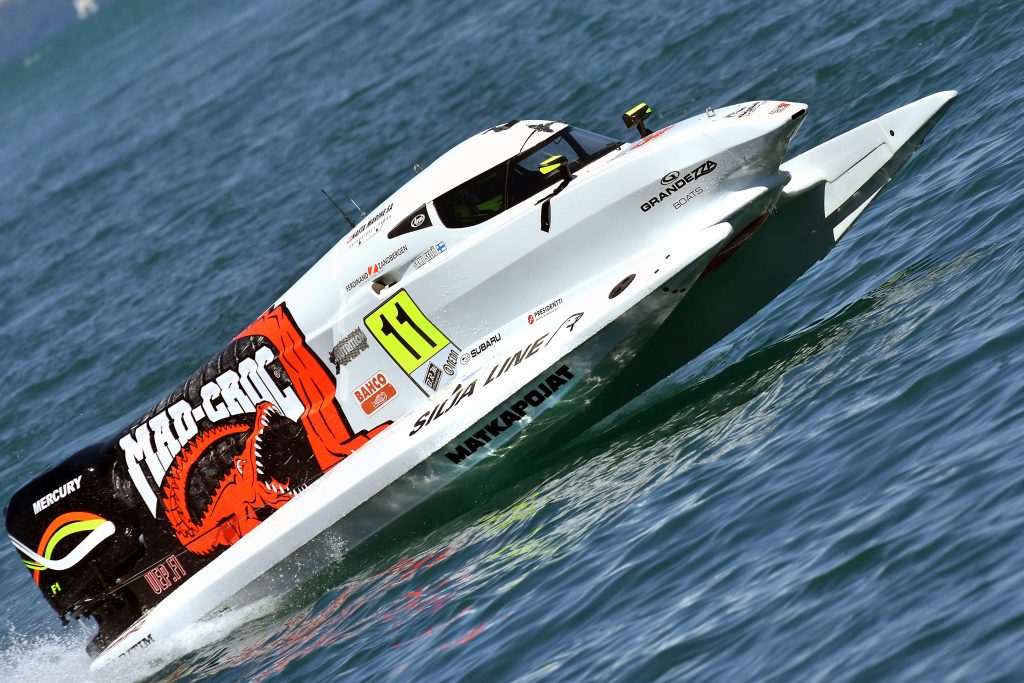 Sunday, 17th July, EVIAN (France): Sami Selio’s run of bad luck continued in Evian at this weekend’s Grand Prix of France, but his disappointment was soon put to one side after a simply brilliant drive by his young teammate Filip Roms, finishing in second place and taking his second consecutive podium in France.

The race win went to Team Abu Dhabi’s Alex Carella with Victory Team’s Shaun Torrente taking third in a race of attrition that saw eight of the 20 starters failing to go the distance, with two failing to make the start.

Selio’s misfortunes kicked in in qualifying after posting the sixth quickest time in Q1 then forced to sit out Q2. His frustration was heightened when a needed engine change dropped him to 17 for the start of the race, seven places behind Roms. “Qualifying was more about learning things about the new boat and trying to improve the set up but it was difficult to evaluate in the conditions. So we took it relatively easy but then had the engine problem and changed it which meant we go the back for the race.” said Selio.

From 17th he was able to make up ground and was up to eighth when the engine gremlins struck again, forcing him to retire on lap 19. “There is not much to say. Today really is about Filip. It was a brilliant drive,” said Selio. “To fight like that and hold off Torrente for so many laps was really quite something. We know he is a good driver, especially in the rough conditions and today he showed everyone.”

For 22-year-old Roms it was a brilliant afternoon with the Espoo resident delivering arguably the drive of the day.

From tenth at the start he was up into sixth by lap six and very much in the mix, the exits of Chiappe and Andersson and his pass on Erik Stark elevating him to second.

The man Roms now had to watch out for was a hard charging Torrente who was desperately trying to make up ground after a drive through penalty. For almost 20 of the closing laps he reduced the gap to Roms and moved to within .7 seconds, but the young Finn defended brilliantly and handled every attack that Torrente made on the inside and on the outside, holding his nerve and racing to the chequered flag to take second place, his best ever finish, by less than a second. “It was quite a struggle. I can’t remember for how many laps we fight. The conditions were getting worse and I could see Torrente coming. It was a rough tough race. I was third last year but this feels much better. This was about my driving. Last year I had some luck. It feels really good.” said Roms.

Round 3 of the UIM F1H2O World Championship takes place in two weeks’ time in Portimao, Portugal on 30-31 July.